The Green Party have admitted they can’t win the General Election in Colchester.

Until recently, on their website http://pledge.greenparty.org.uk, if you typed in a Colchester postcode you would have got the following message:

“You live in the Colchester constituency. Your nearest target constituency is Cambridge.” 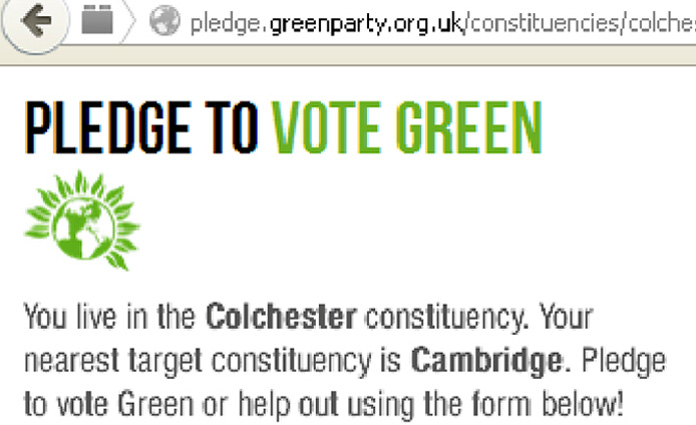 General elections in Colchester are a contest between Lib Dem Bob Russell and the Conservatives.  The other parties are out of the race and cannot win here.  It’s the same on Colchester Borough Council, where the Greens have no councillors.  The Liberal Democrats have 24 seats to the Conservatives' 23, Labour's 9 and the independents' 4.

The Liberal Democrats have been in government since 2010.  In that time, we've been fighting the Conservatives to make Britain's economy more sustainable.  The Conservatives think it's "green crap" but our values are different to theirs.

We've achieved some good things since 2010.  Electricity from renewables has more than doubled, which clearly helps Britain along the path to decarbonisation and energy security.  Since 2010, an average £7 billion a year has been invested in this area - more than double the rate under the last Labour government.

We'd like to do even more but we've been held back by the Conservatives.  They have stated publicly that they want to cap onshore wind farms: their government ministers have "called in" a worrying level of planning applications.

The message is clear: Colchester residents who want environmental action need to back Bob Russell and the Liberal Democrats.