One woman’s determination to make the new estate on which she lives safe has led to the formation of Colchester’s newest Neighbourhood Watch – and the praise of Town MP Sir Bob Russell who described Mrs Carol Pryke “as a community campaigner who is an inspiration to others.” 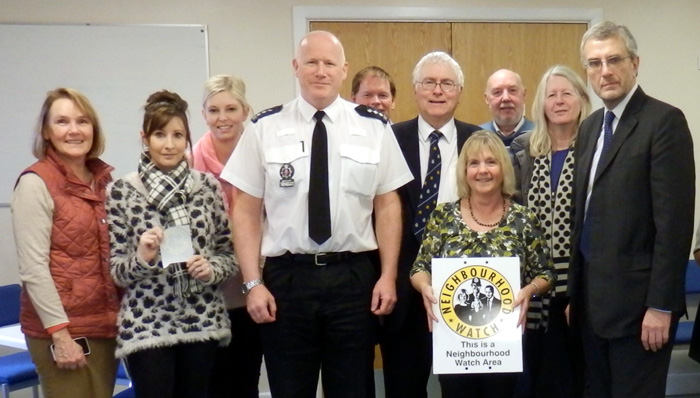 Mrs Pryke is pictured with the Neighbourhood Watch sign for her area, with Sir Bob behind her. Either side of her are Essex Police and Crime Commissioner Mr Nick Alston (right), and the Head of Colchester Police, Chief Inspector Richard Phillibrown, and some of the residents who attended.

Sir Bob chaired a meeting at the Hythe Community Centre for residents living in Peache Road and Lenz Road, a 170-house estate off Port Lane on part of site of the former Paxman industrial factory.

Sir Bob said: “Mrs Pryke, by her enthusiasm and determination, had last month called together residents living in her part of the estate to form a Neighbourhood Watch, an inaugural meeting which I attended.

“Earlier this month she put a leaflet through every other door inviting residents to attend the meeting at the Community Centre, and this proved so successful that the whole estate will now be covered. It will be split into three zones each with its own co-ordinator – the three zones working together to give a complete Neighbourhood Watch for the whole estate.”

Sir Bob said that the presence of the Essex Police and Crime Commissioner, Head of Colchester Police and others was a demonstration of their support for what Mrs Pryke has achieved.

He added: “I would welcome the formation of other Neighbourhood Watches. We live in a relatively safe town, but the more that the community can provide the eyes and ears to help the Police we can help drive down crime levels even more.”