The 50th Anniversary of The Royal Anglian Regiment has been praised in the House of Commons with a Motion put forward by Colchester MP Sir Bob Russell. 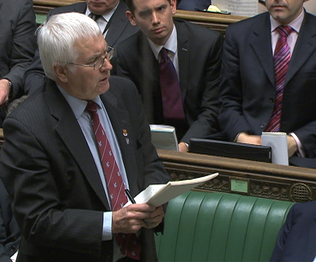 The Motion "congratulates The Royal Anglian Regiment on the 50th anniversary of its formation on 1st September 1964 from the former County Regiments for Essex, Suffolk, Norfolk, Cambridgeshire, Bedfordshire & Hertfordshire, Northamptonshire, Lincolnshire, and Leicestershire."

It goes on to "declare appreciation to former and current members of the Regiment for their service both at home and overseas", and wishes the Regiment "continued success in the years ahead".

The Motion also refers to the anniversary celebrations which were held at the Imperial War Museum, Duxford, Cambridgeshire, last Sunday during which new Colours were presented by HRH the Duke of Gloucester, the Regiment's Colonel in Chief, and the old Colours were paraded for the last time.

Sir Bob was among a small number of MPs who attended the celebrations at Duxford which is where the museum of The Royal Anglians is located.