This week I attended events organised by the Christian Aid, Arthritis Research Uk and the RSPB (Royal Society for the Protection of Birds), whose "Vote for Bob" campaign is illustrated in the photo.  You can read more about the RSPB campaign to get nature on the political agenda at www.voteforbob.co.uk. 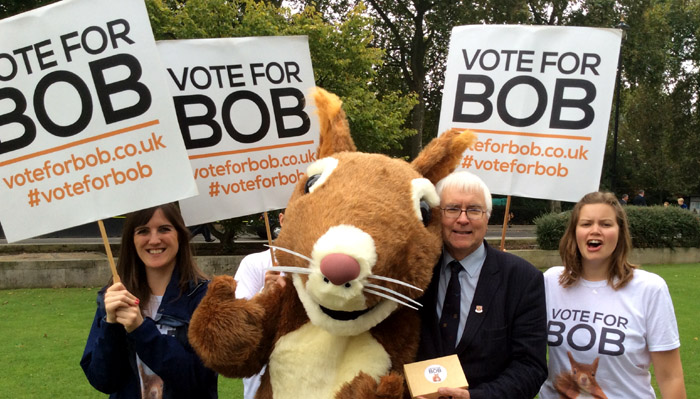 The luck of the draw meant that my name was on the order paper on successive days this week – Foreign Affairs on Tuesday and the Prime Minister on Wednesday. I raised with Foreign Secretary Philip Hammond MP the scandal of political prisoners in Burma. With my question to the Prime Minister I pursued my call for equality to all parts of the United Kingdom in the light of the promise to give more powers to Scotland.

This is what I said to David Cameron: “More people live in Essex than voted ‘yes’ in the Scottish referendum. With fairness needed for citizens in all parts of the United Kingdom, does the Prime Minister agree that what Scotland gets, so should the people of Essex and East Anglia?”

His response was somewhat convoluted, he waffled, and did not answer my question directly!

My diary now continues from the afternoon of Wednesday October 15. I had a meeting with someone from my Party’s HQ. Breaking news about a critical report by Healthwatch Essex on cancer treatment at Colchester General Hospital resulted in interviews with BBC TV East and Anglia TV. In the evening I attended a dinner, hosted by the UK Defence Forum, addressed by Defence Minister Philip Dunne MP.

At mid-day on Thursday I attended a service at St Margaret’s Church, next to Westminster Abbey, to mark the 70th Anniversary of D-Day and the Normandy Campaign, and the Laying-up of the National Standard of the Normandy Veterans Association, whose last Chairman is Mr Eddie Slater from Colchester. In the afternoon I attended another session by the committee considering the Childcare Payments Bill.

On Friday morning I held an Advice Bureau for residents. In the afternoon I visited a company which promotes the installation of LED (light emitting diode) light fittings – they had heard of my criticism of Essex street lights being switched off at midnight and felt their product would be a better option. Next I went to a business in Colchester which has been seriously hit for the past eight months by the removal of the bridge over the River Colne at Spring Lane, Lexden. Both these matters involve Essex County Council; I am pursuing matters. In the evening I attended the executive committee of Colchester Lib Dems.

On Saturday morning I had an urgent appointment with a constituent about problems at a school in the town, before joining colleagues for door-step campaigning. At lunch-time I went to Colchester Scouts camp site at Thorrington to join Beavers (aged six to eight) from Colchester Estuary District taking part in a 24-hour adventure. In the evening my wife and I attended “Christ Church has got talent” featuring members and friends of the Anglican congregation. Participants included our son Mark and his wife and their two sons.

At lunchtime on Sunday my wife and I supported the Colchester branch of ABF (the soldiers’ charity) at a fund-raising event in the Officers’ Mess at Merville Barracks.

I had an early start on Monday. At 7.30am I attended a breakfast event to mark the 10th anniversary of Foundation East at Wherstead Park near Ipswich. Over the past decade it has helped around 500 small businesses unable to get lending from traditional banks. After spending about two hours in my constituency office I went to Colchester Crematorium for the funeral of Mrs Jean Carter who had been a Lib Dem Councillor colleague of mine, representing Castle Ward, for five years from 1990. I then caught the train to London for Defence Questions during which I again called on the Ministry of Defence to transfer to the Commonwealth War Graves Commission the maintenance of graves of military personnel who have died since the Second World War. Next I intervened briefly during the Report Stage of the Social Action, Responsibility and Heroism Bill to promote my campaign for first aid to be made part of the national curriculum in schools. Later I attended a reception to mark Big Energy Saving Week and then one by the Money Advice Service. In the evening was a Defence dinner where the guest speaker was the new Chief of the General Staff.

On Tuesday morning I had a meeting with a representative of Tesco about the company’s development plans in Colchester. This was followed by another session of the committee considering the Childcare Payments Bill. At lunch-time I attended the weekly meeting of Lib Dem Whips. In the afternoon I attended the Defence Select Committee. Lib Dem MPs met at teatime. In the evening I went to receptions by the Construction Products Association and the Retired Greyhound Trust.

First event on Wednesday was a breakfast meeting by the Industry and Parliament Trust to discuss how businesses are tackling climate change. This was followed by a presentation by the Heritage Lottery Fund of examples of how communities are commemorating the centenary of the First World War.