Today’s diary is the second anniversary of my first one which was published on December 8 2012, since when I have not missed a single week. I have enjoyed writing a record of my activities; and hope readers have found them to be informative and of interest. 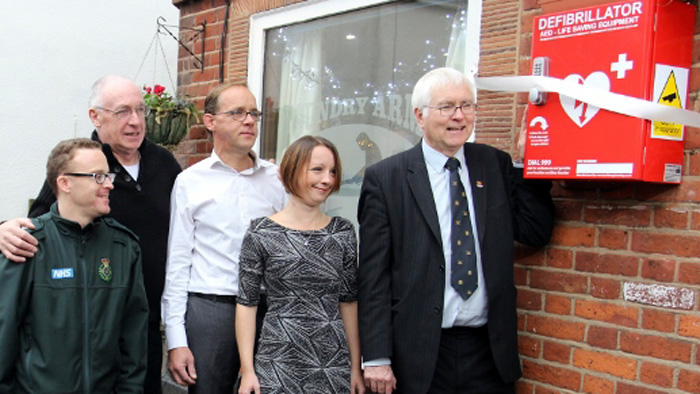 Just after lunch on Saturday November 22 I unveiled a defibrillator at The Foundry Arms Public House, Artillery Street, which has been funded by customers – it is thought the first at any pub in East Anglia to help save the lives of those suffering a heart attack. Sunday was clear of diary entries!

First event on Monday last week was a visit to Colchester Academy, a recently opened ultra-modern building on the site of the former Sir Charles Lucas secondary school at Greenstead.  I was given a guided tour by two senior pupils, and then took part in a question and answer session with the Academy Council.

After a brief visit to my constituency office I caught the train to London for Defence Questions. I asked whether family doctors had been advised to ask those with hearing impairment if they had served in HM Armed Forces, and if so how the Armed Forces Covenant might provide assistance.  I then sat on a Delegated Legislation Committee to approve social security contributions in respect of limited liability partnerships.

Next I attended an event linked with the 25th anniversary of the privatisation of the water industry – not something I wished to celebrate, but I was keen to see what plans the water industry has for our low-rainfall part of Britain.  In the evening I briefly went to receptions by insurance company Aviva, formerly the Norwich Union, and the 20th anniversary of the re-branding to the name Scope by the former Spastics Society.  This was followed by a defence dinner in honour of the RAF Regiment.

On Tuesday I attended a breakfast meeting to talk about funding for universities.  The rest of the morning I went to the Foreign and Commonwealth Office for a briefing on the Middle East.

I spent most of the afternoon dealing with e-mails and correspondence before attending the launch by IFAW (International Fund for Animal Welfare) of a campaign against on-line wildlife crime; charity Contact a Family who help those with disabled children; a reception by The Caravan Club; and the launch by charity United Response of its “Every Vote Counts” campaign to help those with learning difficulties exercise their democratic rights.

The weekly meeting of Lib Dem MPs was at tea-time.  In the evening I attended a reception by the Advertising Association.

First event on Wednesday was a meeting with Network Rail to discuss matters relating to the route between Colchester and London.  At lunch-time I attended a “county” event for Surrey. In the afternoon was a meeting of the Defence Select Committee.

Later I went to the launch of their manifesto by charity WellChild (for families of seriously ill children) and a reception by the RNIB (formerly Royal National Institute for the Blind).  In the evening I attended a reception by charity CRY (Cardiac Risk in Young people).

I spoke three times on Thursday.  The first was during Culture Questions when the Culture Secretary promised he would look at my suggestion we should commemorate the 200th anniversary on Christmas Eve of the Treaty which ended the North American War of 1812-14 between the USA and Britain.  Following a Statement on Afghanistan I again raised my concerns that a huge turbine, transported in 2008 by soldiers from Colchester Garrison through difficult and dangerous terrain in Helmand Province, Afghanistan, to the Kajaki Dam, had still not been installed to produce electricity.  During Business Questions I drew attention to the announcement earlier in the week that printing company Polestar was to close its three sites in Colchester on Christmas Eve with the loss of more than 75 jobs.

On Thursday morning I had a meeting with a group promoting the interests of Palestinians, followed by one with the Society of Chiropodists and Podiatrists.

In the afternoon I had a meeting with Network Rail to discuss better lighting at stations, and attended the launch by insurance company AXA of a children’s road safety campaign.

I caught the train to Hertford in the evening where I was the guest speaker at the annual meeting of East Hertford and Broxbourne Liberal Democrats. I got back to Colchester at midnight, just as the street lights were turned off.

At 6.15am Friday morning I was at the Chelmsford studios of BBC Essex to do the newspaper review.

With my wife as receptionist, I held an Advice Bureau in the morning.  At lunchtime I went to Tesco’s store at The Hythe where I joined student volunteers (all from overseas!) from the University of Essex in collecting food donated by customers for Colchester Food Bank.

In the afternoon I visited a group of residents wishing to form a Neighbourhood Watch.