Each Saturday, Colchester MP Sir Bob Russell gives an insight into the working week of a local MP.

It was a night to remember on Monday 4th August - with my attendance at four events in as many hours to commemorate the start of the First World War on 4th August 1914.  At 7pm, at the War Memorial in front of Colchester Castle, I led a two-minute silence. Among those present were the Mayor, Bishops of Chelmsford and Colchester, and the Garrison Commander. 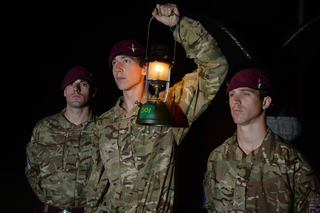 The photo shows soldiers at Merville Barracks marking the 100th anniversary to the precise minute of the start of the First World War (4th August 1914) in a special service when lanterns were symbolically extinguished at 11pm.

The build-up from 6.30pm had been the anchor for that evening's live broadcast of "Look East" by BBC TV East during which I was interviewed.

I then went to St James' Church, top of East Hill, for a Requiem Mass at 7.30pm for those who lost their lives between 1914 and 1918, particularly reference to the 13,727 men of the 18th (or Eastern) Division of the Army whose memorial is in this Church.

Following Communion I left in order to be at King Edward Quay for 8.30pm where I joined members of Colchester Sea Cadets, on board their (former lightship) headquarters, TS Colne Light, for a sunset ceremony.

After a break, at 10.30pm I attended a service of commemoration at Merville Barracks, outside the headquarters building of 16 Air Assault Brigade, attended by around 250 soldiers.

During the afternoon I had been interviewed by BBC Essex about the commemorations, and this led the early evening news.

The rest of today's report begins on the morning of Wednesday 23rd July when I visited the local offices of Nacro, a national charity set up to help former offenders but which today in Colchester also provides housing and other support for single people of whom many are young.

In the afternoon I had a meeting with the Chief Executive of "firstsite" visual arts facility.

Thursday morning was an advice bureau for residents. Early afternoon I went to Alresford Church for the funeral of the mother of a member of my staff.

Later, at The Arena leisure centre, I met apprentices and staff of Catten College and discussed with the operators their concerns over future funding arrangements for apprentices.

At tea-time I attended the sponsors' evening and annual meeting of COLBEA (Colchester Business Enterprise Agency) at their headquarters off Magdalen Street.

I had an early start on Friday as I needed to be at the Chelmsford radio studios of BBC Essex at 5.50am to prepare for the newspaper review in the breakfast programme. 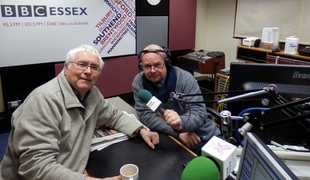 Then I drove to London, parking at the Commons, to be at St Paul's Cathedral for 11am for the Ordination and Consecration of the new Bishop of Colchester, the Venerable Roger Morris who was previously Archdeacon of Worcester.

When it came to Communion I was surprised to find myself in the line where the wafer bread was administered to me by the Archbishop of Canterbury.

In the evening my wife and I attended a reception to launch The Marks Hall Garden and Country Show, near Coggeshall, held over the weekend in aid of ABF The Soldiers' Charity, Marks Hall charity, Essex Air Ambulance and Rotary Club of Colchester (supporting Holidays for Heroes and Action for Family Carers). Music was by the band of The Parachute Regiment.

Saturday morning was spent with colleagues on political activity. In the afternoon my wife and I, with our children and grandchildren, had an enjoyable time at our beach hut at Brightlingsea.

In the evening, at Playgolf Colchester, Bakers Lane, I started (as I have done for five out of the six years it has existed) the annual "starlight" 10-mile walk with a circular route around Colchester to raise money for Colchester Hospitals' Charity appeal for the breast cancer unit. Around 60 people took part.

A clear Sunday enabled my wife and I, with our twin son Andrew and his wife, to visit Poplar Nurseries at Marks Tey where we had lunch.

Monday started with a meeting with the Environment Agency to talk about its general operations; followed by one with a resident concerned about possible flooding from the River Colne which he would like to see dredged from East Bridge to The Hythe.

In the afternoon I had a meeting with two residents about an on-going case; and dealt with correspondence. In the evening I attended a meeting of Liberal Democrat Borough Councillors at the Town Hall.

On Tuesday morning I had an Advice Bureau for residents, my 900th since I was elected MP in May 1997.

At lunch-time I went to McDonalds restaurant near Leisure World to thank off-duty staff (from Colchester's three branches) who had volunteered to collect rubbish from public footpaths in the Cowdray Avenue area.

They had been inspired by resident Les Swaffer who for the past ten years has been collecting rubbish on the footpath from the Broadlands Estate to Leisure World.

I spent the afternoon dealing with correspondence.

When I was told by colleagues that the Pope was now on Twitter I had to admit defeat and agree to join this form of social media! My first Tweet announced my milestone Advice Bureau.

Sir Bob Russell is the only non-Conservative MP in Essex and Suffolk.