News that several hundred British troops are to go to Iraq – in a training role to assist Iraqi forces defend the country against terrorist groups – did not come as a surprise to Colchester MP Sir Bob Russell because he was in Iraq last week on a visit with the Defence Select Committee.

The committee had three days of intensive meetings and briefings with British military and diplomatic personnel and also with Iraqi political leaders, including the President. 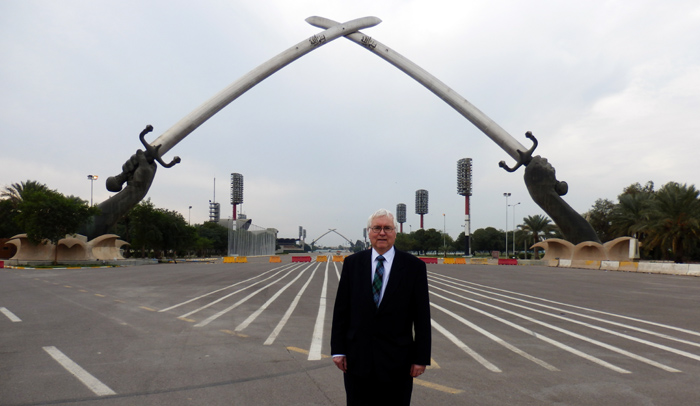 The Committee then travelled to Jordan for a further day of meetings including one with the King of Jordan.

Sir Bob, who voted against British involvement in the invasion nearly 12 years ago which led to the fall of the regime led by Saddam Hussein, said that “the consequences of Tony Blair’s appalling decision are today ones of immense humanitarian disaster particularly in the north of the country with atrocities against the civilian population as bad as that of the Nazis during the Second World War.”

He therefore supports the involvement of British military personnel in a training role – but not as combatants against the terrorists because this is something which Iraqi political leaders are anxious to avoid.

Sir Bob said: “In response to a question I put to the President, he said No to British combat troops on the ground against the insurgents but Yes to training, more equipment and a continuation of air strikes.”

He added: “The President explained that a return of combat troops would be regarded as ‘occupying forces’ which would create other difficulties for Iraq’s civil order and governance.”

The MPs stayed in the heavily fortified British Embassy during their three days in Baghdad, and were given armed “close protection” when they drove outside the secure international zone. They wore body armour and travelled in an armour-plated vehicle.

He discovered that one of the close protection team is a former soldier who served with the 2nd Battalion of The Parachute Regiment in Colchester.

Other meetings were held with the Iraq National Security Advisor, Iraqi and foreign journalists, Iraq’s Defence Minister and Prime Minister’s Chief of Staff, American Ambassador and others at their Embassy, Speaker of the Iraqi Parliament, the Vice-President and 25 tribal leaders wearing Arab robes.

Meeting a former Colchester soldier was not the only local connection, for the President’s daughter introduced herself to Sir Bob as a former research officer at the University of Essex. She was at the Wivenhoe Park campus, in the Department of Physics, from 1996 to 1998. She lived in Colchester for two years.

The Committee then flew to Jordan where they met King Abdullah. In the past year around 6,000 British troops have undertaken training exercises in Jordan.

Another meeting was with the Foreign Minister and at the Defence Ministry with the King’s brother, Prince Faisal, who trained with the Royal Air Force and is a military advisor to the King.

Jordan is developing a “quick response force”. Sir Bob said: “We visited the force’s training area and base, now under construction, which is being part-funded by the UK with training by various nations including British military personnel.”

The Defence Select Committee will now prepare a report on the visit to Iraq and Jordan; and in due course report to Parliament.