Colchester MP Sir Bob Russell has visited the Falkland Islands through his membership of the Defence Select Committee. 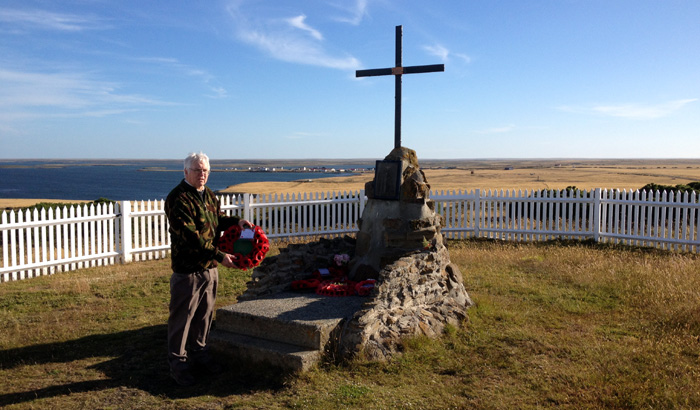 Much of the programme involved top level briefings to consider matters relating to the continuing threat to the South American islands by Argentina which invaded the Falklands in 1982.  The Islands were subsequently liberated by British forces with the 2nd and 3rd Battalions of The Parachute Regiment playing a leading role.

During his visit Sir Bob laid a wreath at the Memorial for members of the 2nd Battalion who lost their lives.  He also went to the site where the Commanding Officer, Colonel “H” Jones VC, was killed.

Sir Bob was accompanied by another member of the Defence Select Committee, Conservative MP Colonel Bob Stewart who represents Beckenham in Kent.  They will be preparing a report with recommendations for the Committee to consider, and then to forward to the Ministry of Defence.

By chance, attending today’s (Wednesday’s) meeting of the Defence Select Committee was the Secretary of State for Defence, the Rt Hon Michael Fallon MP, which enabled Sir Bob to urge that the military infrastructure on the Falklands needed improvements in light of Argentina’s continued verbal aggression against Britain.

The Falklands are a British Overseas Territory and have been under the British Crown from when the Union Flag was first hoisted there on 23rd January 250 years.

Sir Bob told Mr Fallon that Britain had missed commemorating this event, although it had been on the Falklands.  He said that this showed that the Falklands were British long before Argentina become an independent country, thus proving that Argentina’s claim for sovereignty was wrong.

Later this year, at different times, soldiers from 3 Para and from the Second Battalion of The Royal Anglian Regiment will each be deployed for eight weeks in the Falklands.

During his visit, Sir Bob met two civilians whose home is in Colchester plus a member of the RAF Police who was once a Special Constable in Colchester.