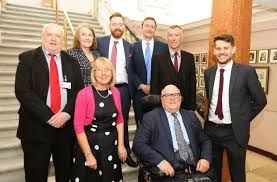 Looking good! A new alliance between the Liberal Democrats, Labour and the Highwood Independents has been agreed. Lots of plans for 2019 on and a clear majority over the Conservatives.

Theresa Higgins takes over from Nick Barlow to head up commercial services. Martin Goss remains as waste, environment and transportation boss and David King will cover business and resources.

A good year lies ahead - lots to do - and the energy and will to make a difference, Lib Dem led.