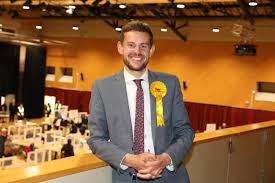 Lib Dems lead the current ruling coalition, with Labour. Together they went into Thursday’s poll holding 24 seats.  When the results were counted, they still hold 23, Lib Dems still one ahead of Labour at 12 to 11 with the Greens up one seat to 2.  Conservatives ended the night unchanged with 23 seats in the Borough Council.

To great Lib Dem winners like Martin Goss, Mike Hogg and Lyn Barton a huge 'well done' and to David King a welcome in taking over from Anne Turrell in our other County seat.

We were all thrilled to see Mark Cory and Michelle Burrows elected, they pulled off an extraordinary double win at Wivenhoe for County and Borough. But all Lib Dems will be sad to see the loss of New Town and Christ Church and John Baker at County and the near miss by Paul Williams after a great campaign at Stanway.

But, progressives continue to hold the majority of seats and the popular vote across Colchester!  And to be a strong opposition to the Tories at the County Council.

To every candidate, supporter and resident thank you.  We will be looking now with care at the results and our next steps.