Colchester MP Sir Bob Russell said: “I would welcome an independent inquiry into the East of England Ambulance Service – including whether it was sensible for the last Labour government to set up such a huge organisation covering the counties of Essex, Suffolk, Norfolk, Cambridgeshire, Bedfordshire and Hertfordshire.  I think this may in part be responsible for the criticisms of its performance. 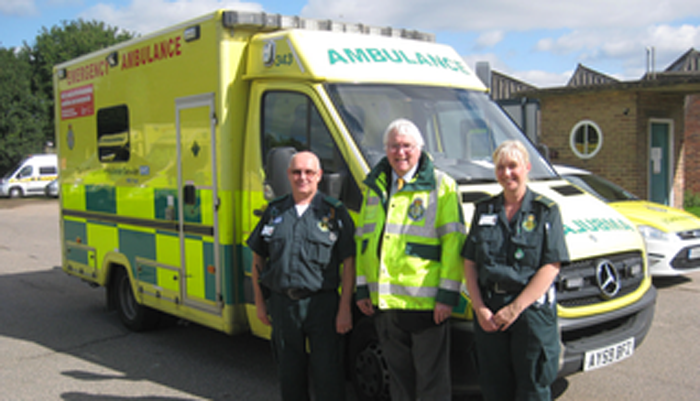 Sir Bob has in the past spent an entire shift “on call” in an ambulance based at Halstead Road, Lexden, and also a full night shift at the Accident and Emergency Department at Colchester General Hospital.

“I have had cause in the past to criticise delays and other issues relating to the Ambulance Service, and in addition to having meetings at my constituency office in Colchester I have also visited the East of England Ambulance Trust’s headquarters near Cambridge including attendance at an Annual Meeting where I expressed my concerns.”

He added: “I pay tribute to our Ambulance personnel who I feel have been let down by management at regional level. We need to get management for Essex ambulances back to being in Essex.”

Sir Bob further repeated his belief that too many people are going to Hospital A&E departments, and that if First Aid was taught in schools as part of the National Curriculum this would lead to more understanding of the appropriate way to deal with situations. The campaign is supported by St John Ambulance and Red Cross. Sir Bob is Chairman of the All-Party Parliamentary First Aid Group.