Parliament returned on Monday after a break for the Scottish Referendum and party conferences – with me expecting to have a small cameo walk-on part following the Clacton by-election. But it was not to be. 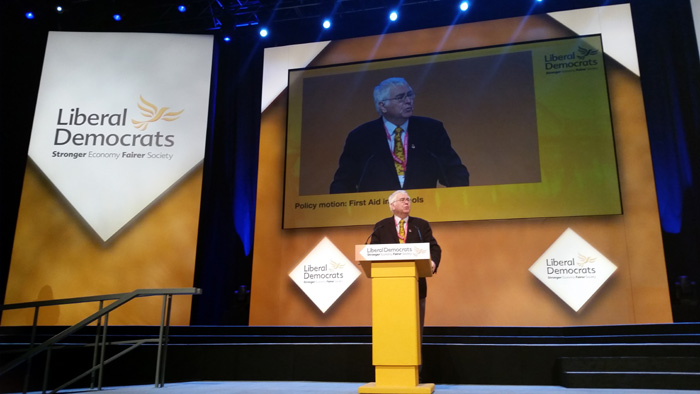 On Saturday afternoon, while shopping with my wife in the Abbot’s Road Co-op in Colchester, I took a phone call from the switchboard at 10 Downing Street who informed me that the Government Chief Whip, Michael Gove MP, wanted to speak to me. He told me that Douglas Carswell, who had won Clacton for UKIP, wished me to be one of his two sponsors for his formal swearing in ceremony in the chamber. I was surprised as I have been a critic. That said, as one Essex MP to another I agreed. However, on arrival at the Commons early on Monday afternoon I was informed that the “Father” of the House, veteran Tory MP Sir Peter Tapsell, had stated that he wished to be one of the sponsors along with another Tory MP. I was not going to make a fuss, so withdrew.

This week’s diary now picks up from the evening of Wednesday October 1 when, at the Community Stadium, I attended the annual awards ceremony for Colchester in Bloom – I was delighted to receive a “special contribution” certificate for the garden in front of my constituency office.

I held an Advice Bureau on Thursday morning, the second of the week. In the afternoon I met local people involved in helping Afghan interpreters who have settled in Colchester.

On Friday morning I marked 50 years of passing my driving test with a reunion with my driving instructor from 1964, Mr Brian Clow who lives at Wivenhoe. I am proud to have driven for half-a-century without a single motoring conviction. A few years ago I passed my test for the Institute of Advanced Motorists. In the afternoon I met the new Bishop of Colchester. In the evening I joined colleagues for campaigning.

On Saturday morning I caught the bus to Stansted Airport to fly to Glasgow for the Liberal Democrat Party Conference, held in the Scottish Exhibition and Conference Centre. After booking in I attended a meeting of Lib Dem Parliamentarians, then an upbeat rally addressed by Party Leader Nick Clegg, and two evening receptions: the first hosted by Mr Clegg and then one for delegates from the East of England.

On Sunday morning I spoke in a debate which received unanimous support that First Aid training should form part of the national curriculum in schools.I am Chairman of the All-Party Parliamentary Group on First Aid. I have worked closely with St John Ambulance on this campaign which is also supported by Red Cross and British Heart Foundation. During the afternoon I toured the many stands in the exhibition hall. Following a meeting for Parliamentarians, Monday’s diary included interviews with BBC TV East and live on commercial radio station LBC. I also did a filmed interview with charity Kidscount about knife crime. Later I had a meeting with Abellio Greater Anglia to discuss rail services. At a fringe meeting about the outcome of the Scottish referendum I criticised the “no” campaign for not doing more to highlight the defence consequences of separatism. I then had a meeting with the charity Hearing Loss. In the evening I spoke at a gathering of Lib Dem candidates aspiring to become MPs. After this I hosted an event for The Royal British Legion to launch the Legion’s “manifesto” for next year’s General Election. I am a former Parliamentary Advisor for the Legion. My day ended at a meeting where veteran pollster Sir Robert Worcester was the guest speaker.

Tuesday started with a live interview (from my hotel bedroom) on BBC Essex’s breakfast programme. Later I did one with Heart (Essex). Following a meeting of Parliamentarians, I caught the bus to Glasgow Airport to fly to Stansted Airport and then by bus back to Colchester.

I spent Wednesday in my constituency office catching up on being away, other than when my wife and I attended the funeral of former Colchester Borough Councillor Shirley Haylock who between 1990 and 1999 served with me in New Town Ward. In the evening I went to Greenstead to speak to Cub Scouts of 8th Colchester, and present certificates.

On Thursday morning I did correspondence and visited St Thomas More’s Catholic School for a meeting with the Head. This was the day of a double by-election, for the Clacton Parliamentary seat and Brightlingsea Division of Essex County Council, both of which I campaigned for respectively in the afternoon and evening. When the polls closed at 10pm I was the Lib Dem who faced the media at Clacton Town Hall. I had interviews with BBC Essex, BBC TV East, Anglia TV and Radio 5 Live. At 2am I returned to Colchester. During Friday morning’s breakfast programme on BBC Essex I did a live interview about the Clacton by-election.