Colchester General Hospital has dominated my past week.  Already in “special measures”, when it was announced that there was a “major incident” this prompted (from when I was awakened last Saturday morning by Radio Five Live) national media, and not just local media, to contact me for extensive coverage to the new concerns.

It has continued most of the week, my busiest concentrated media involvement for many years, with more than a dozen interviews on BBC and ITV national and regional television, and radio news bulletins plus newspapers.

On Monday evening I had an urgent meeting with the Secretary of State for Health (Jeremy Hunt). On Tuesday afternoon I returned to Colchester to discuss with the Chief Executive and Chairman of Colchester Hospital University Trust.

The “major incident” sounded worse than the reality – it involved measures within the hospital to deal with an unprecedented demand on beds and pressures on the Accident & Emergency Department. Hopefully this will be resolved in the next few days.

My conversations with the Health Secretary and the Trust’s Chief Executive and Chairman indicate, however, that it will be several months before the Hospital comes out of “special measures” as it will take time for management structural issues to be turned around by the new leadership team.

Throughout I expressed support for the Hospital’s dedicated medical and support staff.

The rest of today’s diary resumes from the afternoon of Thursday 6 November when I attended a reception for charities involved with health issues.

Returning to Colchester, in the evening I had a meeting with Lib Dem colleagues.

There was an Advice Bureau on Friday morning.  In the afternoon I held meetings with representatives from a nursing home; two local businessmen about a leisure proposal; a dentist about his practice; and a local Mencap “ambassador”.

In the evening, at the Wilson Marriage Centre, I chaired the annual meeting of Colchester Adult Learning Access group; I was re-elected President.

The East of England Liberal Democrat Annual Conference was held on Saturday at Churchill College, Cambridge.

On Sunday I attended the Service of Remembrance at Colchester War Memorial.  It was the biggest attendance, I estimate more than 4,000 people, in the 40 plus years I have been going.

At lunch-time my wife and I supported a lunch at the Oak Tree Centre, Harwich Road, organised by former Mayor Helen Chuah who is President of Colchester Centurion Rotary Club. Proceeds went to Chavasse VC House rehabilitation centre at Colchester Garrison.  In the evening I visited a colleague who was in Colchester Hospital.

First appointment on Monday morning was at Colchester Institute with the Principal on a funding matter.  At lunch-time, at their Moorside premises, I attended the fifth anniversary of Colchester Food Bank; I am joint Patron with the Bishop of Colchester.

In the afternoon, at the Commons, I spoke in Communities and Local Government Questions about housing planned by one local authority on the border of another without the adjoining community having any say.  I had in mind plans by Tendring District Council to build around 3,000 houses on the eastern border of Colchester.  Later I attended an energy saving event promoted by E-On.

The Scottish Office was the venue for an evening reception, hosted by Deputy Prime Minister Nick Clegg, for reservists, military organisations and employers on the eve of Remembrance Day.

During the breakfast programme on BBC Essex on Tuesday, Remembrance Day, I was interviewed about its significance to me as MP for a garrison town.

Later I had a meeting with the Local Government Boundary Commission for England about proposals to change Colchester Borough Council’s ward boundaries.

Next I had meetings with the National Housing Federation and Children’s Society.  At 11am I was at The Cenotaph for the Two Minutes Silence and commemorative service.

At lunch-time I attended an event to celebrate National Community Meals Week, organised by the National Association of Care Catering which traces its roots to the Second World War when “meals on wheels” started in December 1943.

I then supported my colleague Stephen Gilbert (MP for St Austell and Newquay) when he moved his Bill to have a National Defence Medal; I am one of his co-sponsors.  The Defence Select Committee met in the afternoon.

At tea-time the House rose until Monday last week. Back in Colchester I attended a meeting with Lib Dem colleagues at our Party HQ.

On Wednesday morning I held an Advice Bureau.  At lunch-time I had my annual “Christmas message” interview with Colchester Talking Newspaper, for the visually impaired. In the afternoon I officially opened “Roberts Road” to link Mersea and Military Roads, which I reported last week.

In the evening I held a public meeting with representatives of First Buses who run many of the services in Colchester.

I visited St Teresa’s Catholic Primary School, at Lexden, on Thursday to speak at the assembly and present awards, and later questions put by Year 6 pupils.

In the afternoon I went to local company GS Contracts at Moorside.  A Colchester success story, from humble beginnings they now employ around 50 people including apprentices which was the purpose of my visit.

Then I visited Colchester Fire Station to discuss with fire-fighters their concerns over changes to their pensions and retirement age. 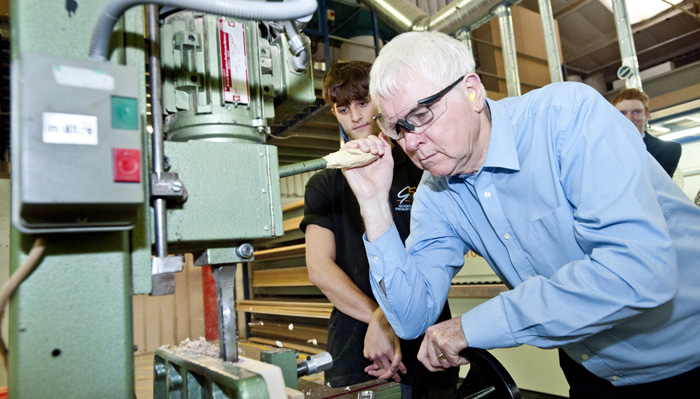