This week I attended a Parliamentary event organised by Diabetes UK to promote a campaign to improve diabetes healthcare.  I am pictured at the event with Colchester campaigner Mrs Chris Chaplin. 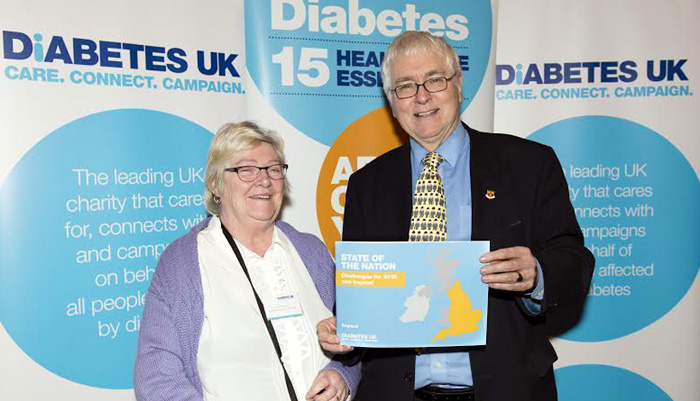 Today’s diary starts on Tuesday morning last week when I had three appointments at the House of Commons. First was with Trade Union representatives from Unison to discuss the decision by Essex County Council to switch-off most street lights from midnight, a policy which I oppose.

After this I had a meeting (which was filmed) with a new national organisation called “Debater” which aims to encourage educationalists to engage young people in having a better understanding of politics.

Next I met a senior member of staff from Liberal Democrat Party HQ about the General Election (now only 96 days away!).

First thing after lunch I went to the office of the Defence Select Committee to read a confidential file relating to an overseas British military base.  I spent the afternoon dealing with e-mails.

At tea-time I attended a reception for the National Association for Voluntary and Community Action, which promotes the interests of around 900,000 organisations who in a variety of ways make a difference in our communities.

After this I went to the weekly meeting of Lib Dem MPs.

In the evening, with three other Lib Dem MPs, I attended a briefing dinner hosted by companies in the Defence sector.

On Wednesday morning I did a radio interview on BBC Essex’s breakfast programme about the continuing delay in the publication of the report on the Chilcot Inquiry into Britain’s illegal invasion of Iraq, a war which I voted against.

During the morning a group of primary age pupils from King’s Ford and Monkwick Schools, Colchester, visited the Houses of Parliament; this had been arranged by my office.

Later I was given a confidential briefing ahead of an overseas Defence visit.

Next came Prime Minister’s Questions, and my challenge to David Cameron about the railways which featured in my report last week.

In the afternoon was a meeting of the Defence Select Committee.  Then I went to the BBC studios at Millbank where I did an interview with BBC Essex, broadcast on Monday this week, to start the count-down for the General Election on 7th May.

Later I attended a reception by the charity Prostate Cancer UK, one of whose organisers lives in Colchester.

After this was an event to promote the automatic enrolment of Workplace Pensions, organised by the Department for Work and Pensions.  In the evening I attended a Defence dinner where the guest speaker was a Rear Admiral in charge of sea training of personnel.

My only appointment on Thursday was with mental illness charity Mind in respect of their concerns ahead of the General Election.

Next I renewed acquaintances with the person who made it possible for Colchester Military Wives Choir to sing at the Canadian International Military Tattoo in Hamilton, Ontario, in June 2013.  Because I would not be at the Commons this week, when the draw would be made each day for oral questions next week, I went to the Table office and submitted them.  I will find out on Monday if I was successful with any.

I spent the rest of the day dealing with e-mails and correspondence before at tea-time going to ITV studios at Millbank for a recording of Anglia Television’s “Late Debate” programme which was broadcast later that evening.

On Friday morning I had an Advice Bureau.

At lunchtime I had a meeting at Colchester Hospital with the Chairman and Chief Executive for an update on matters.

In the afternoon I went to Stanway for a briefing by a company who have plans for further retail development at Tollgate.  This is not in my constituency, but I had been invited to attend.

Back at my constituency office I met representatives of Age UK Colchester branch to discuss a scheme I have proposed to help raise funds to support the charity’s advice service for pensioners.

To celebrate my wife’s birthday we attended a performance of “42nd Street”, at the Mercury Theatre, by Colchester Operatic Society.

A Lib-Dem fund-raising table top sale was held on Saturday morning at our headquarters.  With colleagues, I also did some election campaigning.

In the evening we had a family birthday dinner at the Warehouse Restaurant, Chapel Street, which in our younger days was the church hall for the adjoining Headgate Congregational Church – now the Headgate Theatre – where we were married in 1967.

Sunday was free of diary entries.  Mid-afternoon I caught the train to London where I met two colleagues for an overseas visit to meet British forces serving at an overseas location.  For security reasons I cannot say where I have been until after the military flight has landed.  I will give a full report next Saturday.